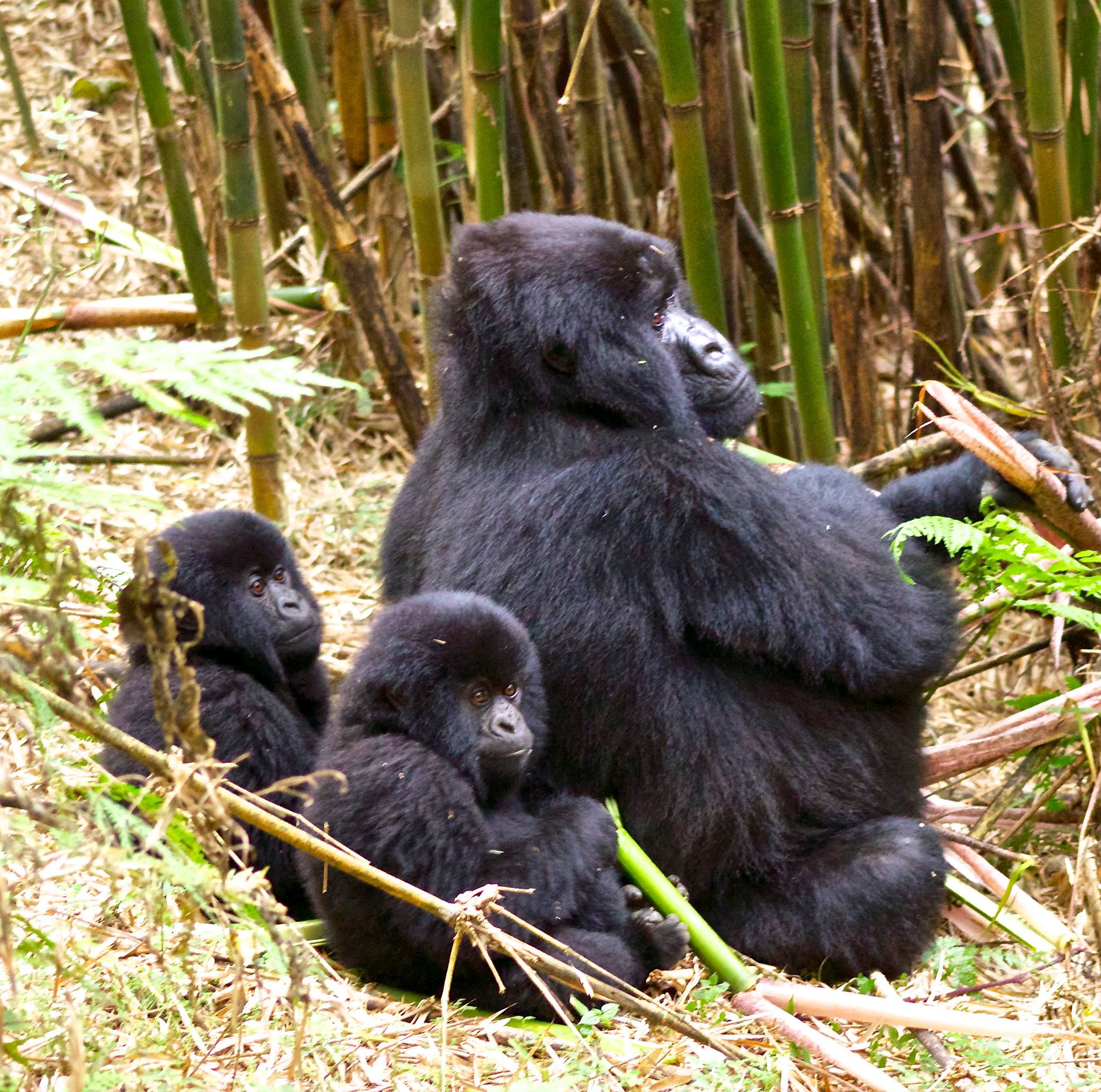 DAY 1: DRIVE TO VOLCANOES NATIONAL PARK
A representative from AA safaris and tours will be there at the airport to welcome you when you arrive and drive you to Kigali just after he briefs you about your safari. You will drive through Kigali which is the capital of Rwanda to the popular Parc National des Volcanoes .The trip towards the northwards takes you through the gorgeous terraced hillsides that display a lot about Rwanda’s landscape and this is why Rwanda is called the land of a thousand hills. You will be climbing down to the bottom of the overwhelming Virunga volcanoes. Overnight and dinner will be at a hotel of your choice depending on your budget
Luxury Accommodation: Virunga Lodge / Sabinyo silver lodge
Mid-range Accommodation: Le bamboo gorilla safari lodge / Mountain Gorilla view Lodge / Mountain Gorilla Nest Lodge / Hotel Gorillas
Budget Accommodation: Virunga hotel / Kinigi Guest House / Hotel Muhabura

DAY 2: GORILLA TREKKING IN VOLCANOES NATIONAL PARK
You will have breakfast very early, then head for gorilla tracking in Parc National des Volcanoes but you will first have a briefing at the headquarter, get a ranger to guide you through the jungle. You will walk along through the forest on the slopes of the Virunga and you will have a wonderful experience. It is a guarantee that you will see the gorillas and you will spend an hour with them sitting around, watch them play around, feeding their young ones and then later you will return to the lodge where you will have your dinner. Most of the gorilla families however are harder to pin down and tracking may take a full day more so if it is a rainy season. Overnight and dinner will be at your lodge where you spent the last night

DAY 3: GOLDEN MONKEY TRACKING IN RWANDA
Just like the previous day, breakfast will be served early and then report at the ORTPN Office with your driver for registration and briefing about Golden Monkeys trekking. The Golden monkey is one of the rarest primates in Africa and it is now believed to be the only population of these monkeys left is found in the Virunga Volcanoes National park though a few of them are fund in the Nyungwe Forest National Park in Southern Rwanda but this has yet to be confirmed. Dinner and overnight at your lodge

DAY 4: DIAN FOSSEY’S GRAVE | RWANDA
In the morning, after breakfast, you will be going for a Dian Fossey trek. The Dian fossey trek will take you to the grave of this late famous American scientist – Dianne Fossey who was murdered in her home for her conservation work and her research projects about Gorillas and other primates in Park des Volcanoes. Volcanoes NP was basically the base for the famous American environmentalist in 1967 and established the Karisoke Research Centre between Karisimbi and Visoke, so spent a lot of time in the park. She is extensively ascribed for saving the gorillas from total destruction by conveying their predicament to the attention of the international community. Her death is attributed to the poachers she had spent her life fighting against. Fossey’s dynamism research was later revealed in the movie Gorillas in the Mist, marked after her memoirs. She was buried in the volcanoes National park in a grave close to her research center amongst the gorillas which became her life. From here, you will cross the borader into Uganda to Bwindi National Park or Mgahinga National Park. You will spend the night at either
Budget Accommodation: Nshongi campsite / Buhoma Community bandas / Bwindi View bandas / Nkuringo campsite tents / Virunga Hotel / Nkuringo safari centre
Mid-range Accommodation: Chameleon hill / Lake Kitandara camp / Mahogany springs / Nkuringo camp site / Wagtail Eco lodge
Upmarket Accommodation: Gorilla Forest Camp / Clouds Lodge / Buhoma lodge
Luxury Accommodation: Gahinga Volcanoes Lodge / Volcanoes Bwindi safari Lodge / Gorilla Resort camp / Silver back lodge
Note that the lodges you select here will depend on the gorilla permits that will be available.

DAY 5: GORILLA SAFARI  IN MGAHINGA | UGANDA
Mgahinga and Bwindi are the two parks in Uganda which part of the Virunga shared by Rwanda, Uganda and the Congo, therefore you can find the rare mountain gorillas in Mgahinga. You will make your choice where you will be tracking but this decision has to be made earlier before you start the tour. You can also hike the volcano or take on a nature walk or do a golden monkey trek in Mgahinga. Overnight and dinner at your hotel, if it is at Mgahinga, hotel may be
Budget Accommodation: Mgahinga Community Bandas / Kisoro Tourist camp / White horse inn
Mid-range Accommodation: Mt Gahinga Lodge  / Travelers’ rest camp / Virunga hotel

DAY 6: DRIVE TO KIGALI CITY – CITY TOUR | DEPARTURE
After breakfast, you will drive back to Kigali and incase you have enough time for a city tour, you will visit the Kigali genocide memorial centre , you may tour to the market, pottery project, handicraft shops, the Franco-Rwandan cultural centre, national museum among other places before the driver/ guide drops you to the airport. End of Uganda and Rwanda safari with AA Safaris and Tours ltd