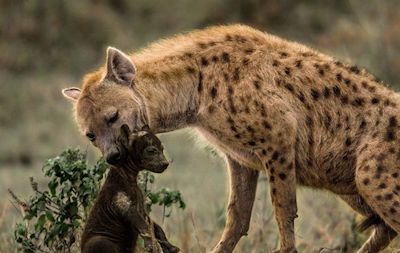 These spotted hyenas are also called the Crocuta Crocuta and its one of the animals that most tourist are interested in seeing during their wildlife tours in Africa. They are said to be the very last ones from the genus Crocuta and are commonly found in the Sub-Saharan regions of Africa which why there are very many of them in Kidepo valley national park which you will see on your Safari in Uganda.

Spotted Hyenas are some of the animals that have survived in the Sub Sahara considering the huge numbers that are still seen in the wilderness compared with other Carnivores. Their survival is as a result of their ability to adapt and use all opportunities presented.

Spotted Hyenas are mentioned on the red list of International Union of Conservation of Nature (IUCN) as animals of least Concern because of the fact that they are very many in the world compared to other animals. They are between 27,000 and 47,000 in number but in some areas where they are not well protected, the population is decreasing drastically due to the existence of hunters and sometimes natural deaths as well as when their habitant is destroyed through human activities.

Theories state they originated from Asia where they were in very big numbers and they are the biggest type available from the Hyaenidae family and are distinguish from others by the structure of their bodies which is bear-like build with less non outstanding mane, the spotted pelt, dual purpose dentition, those round ears, females have fewer nipples They are magical species in a way that they lack features like an external vaginal opening unlike other female animals. They have their famous laugh that can be heard a few miles away that they use to alert the rest of them about existence of food in a particular place. This is their way of communicating with each other.

These hyenas are very good at hunting and are also scavengers. They have very strong jaws that help them tire through their prey’s skin and the bones. Only the hair, the horns and the hooves are the only parts that these hyenas don’t eat. They have the ability to do the prey hunting and scavenging on the prey that other predators pursued. They do eat and digest bones too along with the flesh and skin. This means, the Spotted Hyena is the only Carnivore that eats up everything from its prey. .

You can find these hyenas in places with woodland, the savannah as well as in the desert areas. They are also nocturnal animals which makes them a bit hard to see during the day. They pose a threat to the humans therefore there is that constant human-wildlife conflict. They are said to have eaten people but it is more likely that they will go for the livestock than the humans thus the reason they are targeted by humans.

In regard to their genitals, the males have the usual mammalian genital parts but the females’ is like a male’s with the clitoris positioned and shaped as a male organ in position of erection. This means there is no external vagina and their central urogenital passage is traverse and it’s through there that it urinates as well as giving birth.

You can expect to see the spotted Hyenas in Uganda when you visit the savannah regions of Kidepo Valley National Park, Lake Mburo, Murchison Falls National Park and Queen Elizabeth National Park during your wildlife safari.

A bigger group from Uganda attends the Berlin expo